In April 2020, the Committee of Natural Resources, Property and Land Regulations in the Duma (the Parliament of Russia) proposed an innovative bill intended "to make the forest industry absolutely transparent”, according to Deputy Chairman Nikolay Nikolaev. The move aims to improve regulations related to the timber trade, and to tackle wood trafficking, but it also affects aspects of forest control. Public discussion of the proposal was initiated earlier in February. 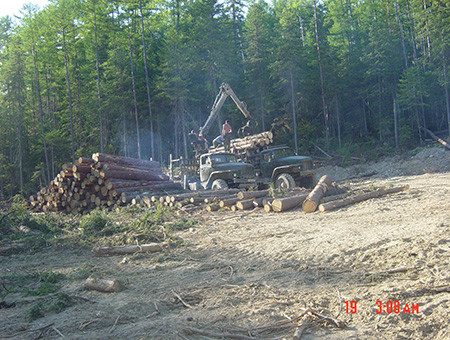 The bill contains legal provisions for reporting requirements in relation to logging operations, including the obligation to declare, in advance of any new operation, the use of machines or equipment designed for cutting trees or for extracting wood from the forest. Under the proposed amendment to the Russian Forest Code, citizens who are found “staying in forest areas” with such harvesting machinery would be deemed to be involved in a logging activity.

Currently, due to the remoteness of many forest areas, and due to the limited number of inspectors (forest rangers) on the ground, it is rarely possible to catch illegal loggers in the act, and very difficult to prove their involvement in such illegal activity retrospectively. The new legislation would allow to quickly detect people carrying out undeclared logging operations in the forest.

As part of the bill, a list of relevant machinery will have to be approved by the Government. The proposed list includes tracked and wheeled skidders, and timber trucks and cranes, that are typically used by illegal loggers. The bill does not require to first register the possession of such machinery, nor any kind of permit before using it in the forest; but if an inspector identifies a machine in the forest that is not associated with a legal “permit” for logging, he/she can raise an infraction for illegal logging even without other objective evidence of any logging, like felled trees. This is clearly designed to deter, and prevent, illegal logging.

The draft bill also introduces additional federal-level government control of wood movements and flows at federal level. The existing “Unified State Automated Information System for Timber Accounting and Transactions” - currently covering the volumes of harvest and sales of round and sawn wood - would be expanded to also cover input-output data on timber transportation, processing and storage. A special state body would be created to handle the verification, with data checks and balances along the supply chains.

So far, legitimate logging companies and environmental civil society groups support the proposed regulation. On the other hand, some owners of such equipment are concerned that the term “staying in the forest” is too wide and could penalize them. Also owners of equipment that is similar but is used for other activities in the forest, such as construction or agriculture, are concerned that the bill could affect them negatively.

Read more information on the Proposed Bill (in Russian) as prepared for public discussion by the Ministry of Natural Resources of RF in February 2020.