Overview of timber sector of Japan

The supply of domestic logs (industrial roundwood) in Japan is increasing since 2002 with a production of 21.6 million m3 in 2018. A significant proportion of domestic log supply in the 2000s was from thinning in planted forest. However, since the beginning of the 2010s the clear-felling area has increased, and the production volume of logs has increased accordingly. Main harvested species for industrial roundwood in terms of volume are:

The proportion of domestic log production classified for lumber, pulp, and plywood is just over 50%, about 20%, and about 20%, respectively, with lumber production accounting for the majority. The majority of lumber products are manufactured using domestic softwood, and there are also lumber imports from North American and European countries. In addition imports of logs and plywood produced in tropical countries have been decreasing significantly, especially since the 2000s, and the volume of domestic softwood logs consumed for plywood has been increasing. Furthermore, paper is manufactured mainly from wood chips imported from overseas. Wood chips for papermaking have been imported mainly from Australia since the 1990s, but imports from Southeast Asia have increased over the last decade or so. 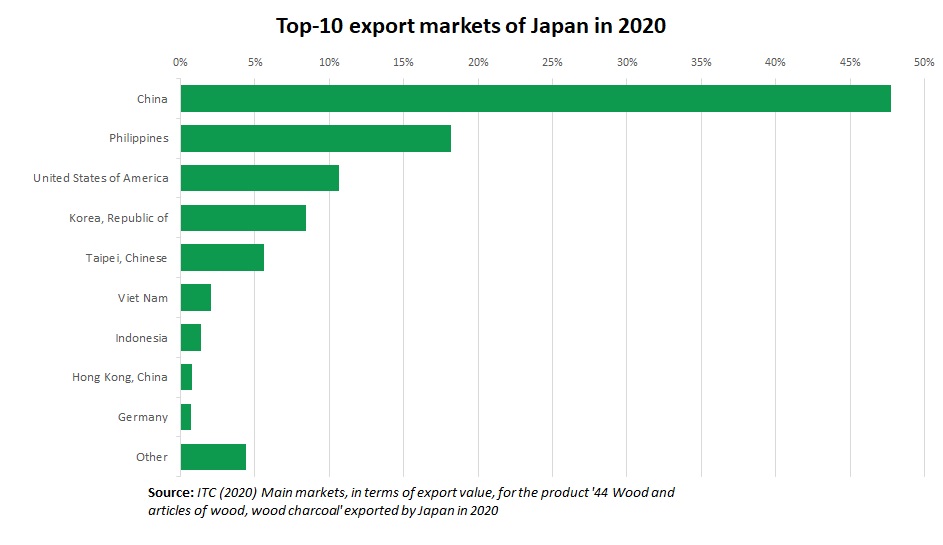 Japan has many ports for wood products export. Exports of log volumes are increasing from some ports in Kyushu region (located in the southwestern part of Japan and geographically close to China, South Korea and Taiwan), where planted forests like Japanese cedar are more mature and softwood log production is active. As for lumber export, most exports come from ports in the industrial areas of the Pacific Belt, and from the Hakodate port in Hokkaido. Both bulk and container ships are used to export logs.