Overview of timber sector of Guyana

The forests of Guyana contain more than 1000 tree species; according to ITTO (2019) the main species exported over 2015-17 were, in descending order:

In addition to these species there are other species which are of interest in the international market, such as:

According to ITTO (2019), Guyana produced on average approximately 549,000 m3 of primary timber products between 2014 and 2018, which almost entirely originated from national forests. The country's timber exports are primarily based on the export of logs and to a smaller extent on the export of sawn wood. The total export value of primary timber products was around 65.2 million US dollars for the period 2014-2018 according to ITTO (2019).

Timber harvesting is mainly carried out in the central and north-eastern parts of the country since a lack of ready access and long distances to the market currently make the commercial harvesting of the forests in the south economically infeasible.

The forest industry of Guyana consists mainly of logging and sawmilling operations. Export of logs is a significant part of the industry’s exports, although the national log export policy aims to stimulate more value-added activities in Guyana; e.g. by charging a progressively increasing rate of export commission (currently max. 20%) on targeted species that have been reflecting high volumes of export in log form. A full ban on log exports has recently been proposed for a number of species (Purpleheart, Locust, Crabwood, Red Cedar, Washiba, Letterwood and Snakewood) in the National Log Export Policy for the period 2016 to 2020. As can be observed from the graph below Guyanese timber is exported to many regions of the world, although logs are mainly exported to China and India while sawn wood and other processed products are exported to a much wider range of destinations.1

1 According to the Guyana Forestry Commission, the USA formed 22% of the export market in value in 2019, followed by China with 18%, India with 7%, Trinidad & Tobago, Barbados, Netherlands all with 5%, New Zealand and Singapore with 4% and the UK with 3%. 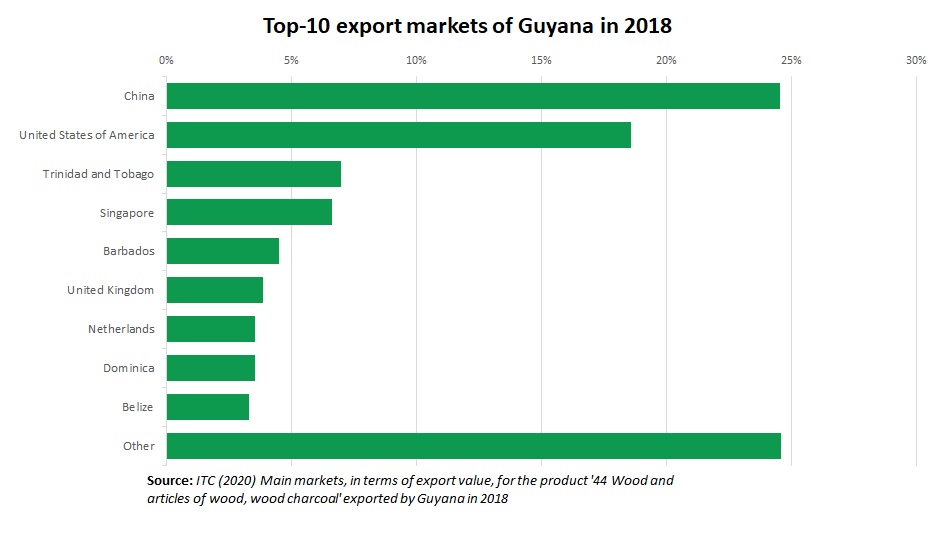 There are several different modes of transporting timber and timber products to the main port of export in Georgetown. The two main modes are waterways and roads. However, the underdevelopment of the road infrastructure in the rural areas has caused timber exporters to rely on less expensive modes of transport including water transport. In a few cases, some operators have the benefits of roads built by mining concessions and Amerindian villages, but this is more the exception.