Overview of timber sector of Democratic Republic of the Congo

forestry companies
in operation in 2019

m3 harvested in 2018
by forestry companies

Very few logging companies are present in the DRC, with only two groups of companies producing more than 10,000 m3/year (FRMi, 2018). In 2019, the timber industry sector was made up of 25 companies, 15 of which are currently active. Currently, the largest in terms of forest surfaces are SODEFOR, MANIEMA UNION, BOOMING GREEN, FORABOLA, CFT, IFCO and ETABLISSEMENT LOLA KITENGE.

The companies in the DRC are fully integrated, they all transform a portion of their logs that are not exported, and there is no trade in logs between industrial operators within the country.

Most forestry companies (nearly 95% of the administrative area) are foreign-owned.

About 20 timber species out of 91 commercially valuable species are harvested and represent 98% of the last 4 years' production, including 40% of the production which is concentrated on 3 species (Wenge, Afrormosia and Sapelli) and about 80% of the production on these 11 species:

The country has suffered decades of tyranny followed by a civil war that has claimed the lives of many people. The chaos of the Mobutu decades and the failure to invest in infrastructure has meant that, up to now, relatively little of DRC’s forests have been exploited industrially (Fern, 2006).

The main logging areas are Mai-Ndombe, Equateur, Mongala and Tshopo, generally near the Congo River and its larger tributaries. In DRC, formal wood production has never exceeded 400,000 m3 of roundwood or logs during the last 10 years. Industrial lumber production in the DRC is subject to a quarterly reporting regime to the relevant state agencies.

In 2016, the four largest producers (COTREFOR-IFCO / MOTEMA / SODEFOR / FORABOLA) harvested 91% of the 206,000 m3 that were produced The project to support sustainable forest management (AGEDUFOR) has established a database covering the industrial forest sector production. According to the AGEDUFOR project (2019), industrial timber permits issued in 2018 to companies allowed for an estimated gross volume of 1,760,347 m3 , however actual production for the same year was 173,384 m3.

Industrial lumber production in the DRC is subject to a quarterly reporting regime to the relevant state agencies.

According to national legislation currently in effect in the DRC (2002 Forest Code), forest concessionaires have the obligation to transform 70% of the logs they harvest within a processing unit (sawmill, rotary cutting unit, etc.). The country has a very low timber processing capacity - there are only 15 sawmills around Kinshasa, Mai-Ndombe and Kisangani and just 1 plywood factory in Kinshasa.

According to Chatham House (2014), nearly 90% of logging in the DRC is illegal or informal, small-scale logging to supply domestic and regional markets. The volume of this harvesting is estimated to have doubled in the last six years, in response to a growing population and income levels.

China and Europe are the main export markets, with a growing share of the Asian market and a sharp decline in the European market. 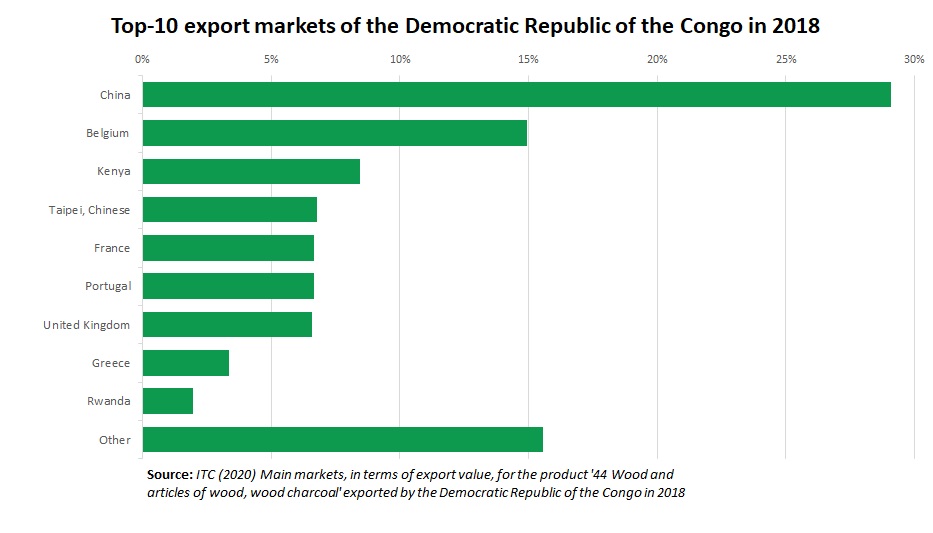 Maritime transport to the port of Matadi from the interior of the country requires the transfer of logs transported by river on a rail or road link in order to bypass the Stanley Falls located on the river downstream from Kinshasa. As for the port of Matadi, it has a limited capacity. A second privately owned port, Matadi Gateway Terminal, was commissioned in Matadi in 2016 and appears to be more functional than the public port. However, it is mainly used for imports.