Overview of timber sector of Gabon

The forest code makes it mandatory to manage allocated forest concessions and to process timber. It also provides for three types of forest permits, the Concession Forestière sous Aménagement Durable (CFAD), the Permis Forestier Associé (PFA), the Permis de Gré à Gré (PGG) and the Forêts Communautaires (UFIGA, 2020). In 2019, the number of Community Forests under Final Agreement was 51 for a surface area of 259,883 ha. While those under Provisional Agreement numbered 41 and covered an area of 113,454 ha. In the same year, there were 97 forest concessions, including 12,739,939 ha under forest management (UFIGA, 2020).

With the 2009 ban on log exports and the obligation for log producers to process theirproduct on site, three types of operators can now be distinguished in Gabon:

Among the species currently harvested, there are mainly 24 species:

Okoumé is the "flagship" species of Gabon's production, accounting for over 60% of the logs produced there.

According to the August 2018 study conducted by FRM entitled "FAC-2030: a strategic vision and the industrialisation of Central Africa's timber sector through 2030", it appears that:

Industrial production in Gabon is very clearly dominated by sawn timber (accounting for over 70% of production) but Gabon stands out from the other countries of the Sub-Region thanks to its relatively significant production of plywood/veneers (Gabon is a top 5 world exporter of tropical timber veneers).

In 2009, the Gabonese government decided to completely ban log exports. This measure was implemented in 2010. Industrial production volumes exported are dominated by the sawn timber segment (over 85% of sawn timber produced in Gabon is exported).

Prior to the log export ban decision, forest product exports were clearly dominated by logs, shipped mainly to Asian countries.

After the log export ban, processed timber exports to Asian countries initially declined (from 2009 to 2010), and then export volumes gradually increased until 2013, with a period of stagnation observed from 2013 to 2014. 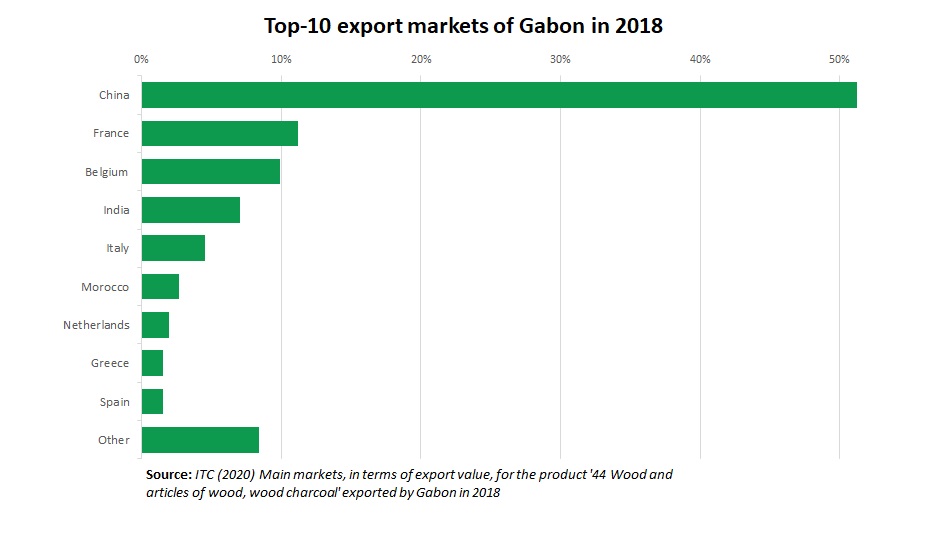 In terms of logistical infrastructures, Gabon has two main ports for timber exports:

The country also has sites under customs authority, which are used to transport forest productstowards the port of Owendo. These are: