Forest resources and context of Suriname

With more than 15.2 million ha of forest cover (93% of its total area) Suriname is one of the most forested countries in the world. 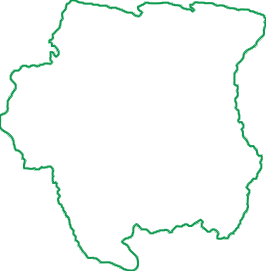 The Republic of Suriname lies on the North-Eastern Atlantic coast of South America, bordering with Guyana to the West, French Guyana to the East, and Brazil to the South. It has an area of 163,870 km2 and a population of just under 600,000. With more than 15.2 million ha of forest cover (93% of its total area) Suriname is one of the most forested countries in the world. Historical annual rates of deforestation are well below 0.1%, so the country is classified as a High Forest cover, Low Deforestation rate (HFLD) country.

Forests provide a wide range of environmental and social benefits, including income and food security for local communities, national income from logging and mining, and global environmental benefits such as climate mitigation and biodiversity conservation. Suriname’s forests act as a carbon sink, making it a carbon-negative country.

Suriname’s forests are part of the Amazon biome. At the regional level, Suriname is located within two of WWF's Global 200 eco-regions, which are considered significant for the conservation of global biodiversity. The country’s forests host significant levels of biodiversity, which can be attributed not only to this significant forest cover, but also to the large variety of habitats, temperatures, and relatively low population pressures to date. The IUCN Red List has recorded 83 vulnerable and endangered species in Suriname. To protect this rich biodiversity and the many ecosystem services provided by forests, Suriname has dedicated 13.5% of its total land area (2.3 million ha of which 1.9 million is covered with forest) to a national protection system to preserve forests and wetlands and is committed to maintaining its HFLD status by increasing efforts towards sustainable forest management (SFM).

More than half of the population lives in and around Paramaribo, the interior is sparsely inhabited. This low population density and the difficult access to the hinterland constitute major reasons for the low historic deforestation rates (0.02-0.05%) and the high remaining forest cover. However, despite its vast forest cover, Suriname is facing environmental challenges. Mining is considered the main reason for deforestation (73% of all deforestation is associated with mining activities), with forestry activities becoming second. Forestry has experienced rapid expansion in recent years, with annual timber production increasing from 150,000-250,000 m3 during 2000-2010 to a recorded 1,184,000 m3 in 2018. For the Nationally Determined Contribution (NDC) to UNFCCC, the emissions from deforestation are also estimated to be three to four times higher in the 2016-2020 period than before 2015.

Unfortunately, the increase in timber extraction has taken place within the context of insufficient capacity to control and ensure that the Forest Management Act is followed. Much of the exploration has been done by Asian investors who export roundwood to countries with limited sustainability demands. While forestry itself is defined as forest degradation rather than deforestation in Suriname - since selective logging is taking place rather than clearcutting - forestry operations are now also causing deforestation due to new infrastructure such as roads and log landings, developed to make new forest areas accessible for exploitation.

Around 4.5 million ha of the natural forests are reserved for production purposes. 13,000 ha consist of plantations, about half of it with introduced species, mainly established in the period 1954-1977, with both pine and broadleaf species. Almost all forests are state owned. Although there is no formally established Permanent Forest Estate (PFE) in Suriname, all formally established protected and conservation areas have been established by explicit legal documents that provide strict guidelines for protection and use.

Timber harvesting areas are granted on the basis of explicit legal documents as well, providing information on demarcation as well as guidelines for management and use, the latter based on the (not-legally binding) national Code of Practice for SFM. In 2017, close to 1.7 million ha was allocated as logging concession (issued over 115 concessions) while a total of 0.8 million ha was issued under the title of community forest to 104 titleholders, both making up for over 90% of the total annual roundwood production.

Due to commonly used selective logging principles in Suriname and a low forest utilization level (an average of 10.1 m3 per ha), overall timber harvesting is well within the pre-defined limits of sustainability. However, significant increase of timber harvesting over recent years contributes to increased degradation of the remaining forest stand and forest cover loss due to associated infrastructure. 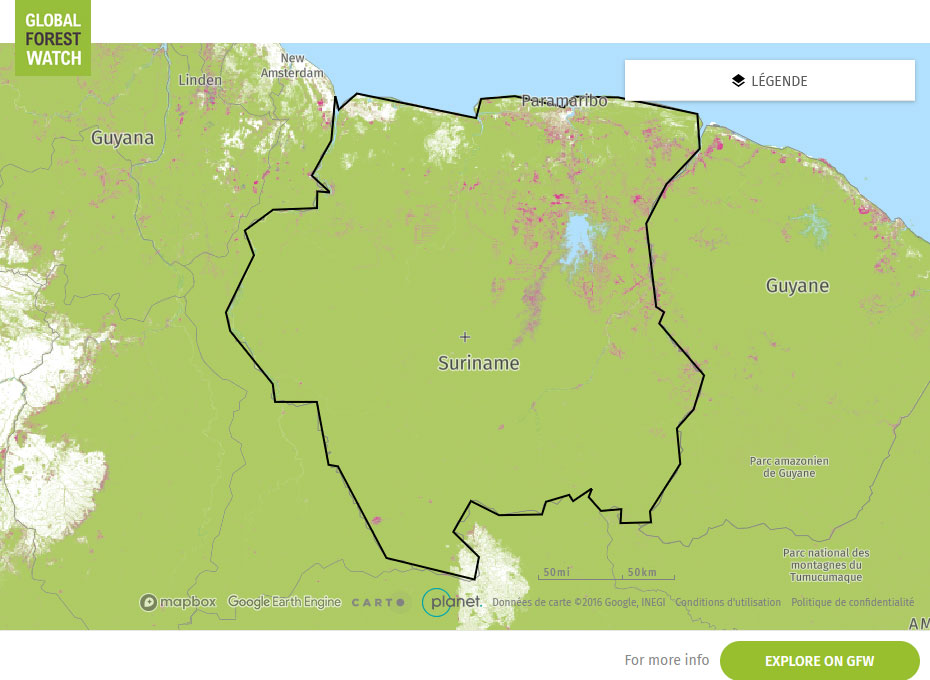