Overview of timber sector of Suriname

Most harvested and traded species, in terms of volume, are:

*) Historically, this species is on the SBB list of prohibited species, for which an additional permit is required.

While the species that are preferred both for domestic use or exports are similar, the volumes are not. Export markets show a clear preference for Basralocus, both logs and processed, accounting for 27%; Gronfolo comes next with 10% of the overall export volume.

Suriname has a large forest resource base that contains a growing stock of valuable hardwood timber. Out of a total of 4.5 million ha that has been designated as ‘production forest’ – the so-called forestry belt - a total area of 2.9 million ha (all types of licencing) is potentially affected by logging activities. Because of the combination of selective logging, a cutting cycle of 25 years and an average cutting volume of 10 m3/ha, the affected area may be close to 120,000 ha annually (2018).

The forest industry of Suriname consists mainly of logging and (primary) sawmilling operations. In 2017, a total of 220 logging companies were registered, while 65 (primary) sawmills, 1 triplex factory and 75 wood processing companies (mainly for furniture, flooring and decking) were in operation. The overall installed capacity of sawmills is estimated to be about 750,000 m3 roundwood input per year of which only half has been used, leaving significant room for growth of local processing. Either for the domestic market or for export. Timber drying capacity is limited and estimated at less than 6,000 m3/yr.

Suriname’s timber is exported to many regions of the world, though mainly to Asia (Singapore, India and China). As there is no ban on the export of logs from Suriname, export of logs account for 96% of the total export volume. 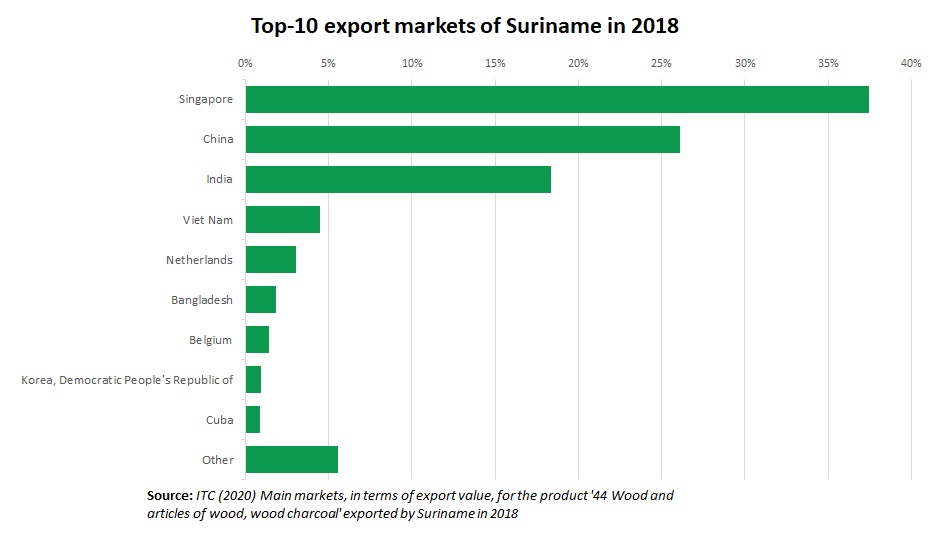 Timber harvesting is mainly concentrated in the middle and northern part of the country - the districts Brokopondo, Marowijne, Para and Sipaliwini - since a lack of ready access and long distances to the market make the commercial harvesting of the forests in the south economically less feasible.

Transport of logs and lumber to local markets or the main port (for export) in Paramaribo is either over land by trucks/trailers (65%) or over water (rivers, creeks, canals) using tugboats and pontoon boats (35%).