Overview of timber sector of Russia

% of the production exported in 2017
(logs export)

Most common production species in Russia are: (FAO, 2012)

According to FEDSTAT data, the industry of Russia produced in 2017 about 212 million m3 of logs, which was primarily used by the local industry while 19,4 million m3 (roughly 10%) of the logs were exported directly. Russia is still one of the world’s largest exporters of softwood. More than half of the sawnwood, veneer and plywood produced in Russia is exported.

The Russian Federation is also one of the largest producers and exporters of industrial roundwood in the world, and the country also exports significant volumes of sawnwood, plywood and pulp and paper. While the Russian State (Government) is the owner of forest lands and forest resources (timber and non-timber), the Russian forest industry is nowadays almost completely privatized.

Although forests occupy over half of the country’s land, the economic role of the forestry sector for Russia is limited. The share of the forest sector in the GDP (gross domestic product) is only 1.3%; in industrial production, 3.7%; in employment, 1%; and in export revenue, 2.4%. (FAO, 2012).

According to Ministry of Civil Defense data for 2016, the forest area affected by radioactive contamination at different levels in Russia, as a result of the Chernobyl accident of 1986, is about 1 mlllion ha. These forests spread over 12 regions, but the largest areas of polluted forest (with about 600 thousand ha) are located in the Bryanskaya, Kaluzhskaya, Tulskaya and Orlovskaya regions, East of the nuclear power plant (Forest management plans per regions for 2018-2029).

The Government decree No.1008 dd. 25.12.1992 provides that all uses of forest resources including timber harvesting, are prohibited in the area of radioactive contamination. It also regulates issues related with radioactivity control and monitoring. The Ministry of the Russian Federation for Civil Defense, Emergencies and Elimination of Consequences of Natural Disasters is responsible for these functions.

China has rapidly emerged as the world’s largest importer of wood products, with Russia by far its most important supplier. While China’s sawnwood imports from Russia raised rapidly until 2018 (while it decreased slightly in 2019, according to Customs data), Russia has remained primarily (though decreasingly) an exporter of roundwood to China, especially in the form of coniferous logs. Two major drivers were behind the emergence of Russia as China’s most important wood supply source: price and the similarity of species used. (WWF, 2007). 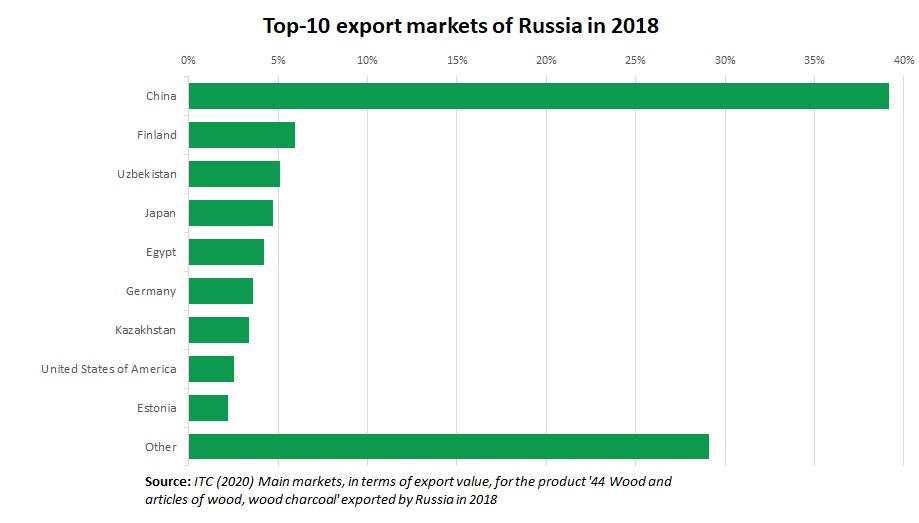